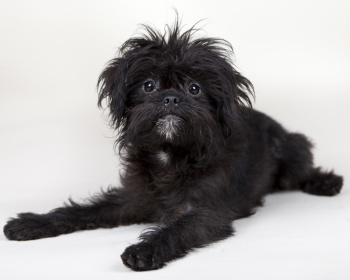 Today it’s hard to say how many years exactly counts affenpincher breed, although official documents refer us only to 19th century. In fact, the closest ancestors of these dogs are depicted in the paintings of Dutch artists as early as the 15th century, and this adds an additional 400 years to the official date. Dogs in the pictures have stiff hair, beard and the same small size.

The question arises – why did artists portray these dogs, aren’t they particularly remarkable? Answer to this question lies in the agility and character of the animals. In that distant time they were used mainly for hunting rodents, especially large rats with which not even every cat could cope.

Over the following centuries, until the beginning – the middle 20th century, a small wire-haired pinscher with restless and rather evil temper, was a favorite pet of each owner a grocery store, stall owner or farmer in Germany and Austria. Literally almost all of these dogs were kept. At least, if we talk about ordinary people.

After all, in addition to the ability to hunt rats, a small the amount of food required (the dog is small), loyalty and courage, affen possessed another important quality – was excellent the watchman. The breed retains this ability today. However, in those distant times, namely in the 17-18 century, these dogs still were larger than today. To say exactly who and how made the breed more miniature, scientists today cannot.

However, it is generally accepted that this happened after how aristocrats, especially noble ladies, started dogs. And, of course, they saw these little dogs exclusively as companions, and wanted to make them as small as possible.

Perhaps there was crossbreeding with pugs, perhaps with now an extinct breed of German silk-hair pinscher, but in fact animals from paintings of the 15th century are slightly larger than almost identical in to everyone (except size), their descendants who lived in the 17th century.

The first breed standard began to be developed much later – only in 1902, although it was finally finalized only 11 years later, in 1913. Today the breed is an affinpincher in many developed countries considered quite rare. By the way, affen translated from German literally means “monkey.” What, let’s be honest, partly reflects the nature of the breed.

Affenpincher is a small, slender dog. Strong physique, short limbs, muscular, proportional to the body. The eyes are round, convex and dark. The ears triangular, folded in half, flattened muzzle, with a “beard”, the tail is short.

The coat is usually black, but it can also be silver, brown, black with a red tan and red color. A dog may have a white spot on its chest.

Affenpinscher – a small, but very temperamental dog. These animals an inexhaustible supply of energy, anger and various surprises, both pleasant and not very. Of course, small sizes do This breed is not very dangerous for an adult. I.e, if on the street the dog catastrophically does not like any a stranger and she decides to bite his leg, this, certainly unpleasant, but not deadly.

That is, such a side of the personality of the affinpincher, as a cocky and irreconcilable character, can even do you a good service, and, although this dog needs permanent hedgehogs, it doesn’t able to cause serious harm to humans. But! Adult only man, since with children everything is much more serious.

The Affenpincher dog doesn’t like children, and this is one of those the most unpleasant surprises. More precisely, one more. And if you have small children, it’s better to pick a different breed, as these dogs will not tolerate, and immediately try to scare or bite. Moreover, they do not like children under the age of 4-5 in particular, since they create a lot of noise and, as a rule, do not know how to behave with animals.

In relation to strangers, the affinpincher does not save neutrality – it retains opposition by default, sometimes quite tough and implacable. Moreover, if the dog is too crazy, she cannot calm down quickly; she needs some time. Then eat, inviting friends home, be prepared that your pet will arrange a small, local war of 15-20 minutes. Then everything should come normal, however, you yourself should not indulge such a disposition animal.

As you probably already understood, this breed is in dire need of early socialization, this is a must. In addition, you must constantly monitor the dog’s behavior, otherwise it’s pretty will quickly start to get out of control. In fact, this is the secret to success in working with an affinpincher is constant control of behavior and rigor, when necessary, give a positive result.

In the circle of his family, the pet is usually playful, affectionate, and often leads yourself very funny. He must not be allowed to run without a leash if there are other animals or people nearby, because the affinpincher may well fight with another dog that will be 10 times heavier his. The outcome of the battle is obvious.

If you have a private house, make sure that there are no holes in the fence, and the fence itself was at least one and a half meters high. Affen it a fine watchman, loud and restless. Despite the love of different types of activity, this breed can most of the day spend at home, even if for a walk you will devote everything 10-15 minutes, it will not be critical.

Parenting, parenting, and once again parenting – this is the best form in order to succeed in shaping breed behavior affinpincher. In addition, you can take time and training, moreover, the dog must be trained in basic commands. Without this is nothing. Particular attention is paid to cancel commands, as you often have to stop the animal in various situations.

In the process of training you need to maintain a positive mood, be patient and have enough goodies in pockets, in addition, it is necessary to maintain rigor, but not go too far. It is necessary to begin education and training in at the earliest age, not later than six months, and if training at some point can be completed, then education and the formation of behavior will continue until old age.

Affenpincher dog breed needs regular combing wool, about 1-2 times a week. Some hosts are cutting your pets or take them to the groomer, ears need to be cleaned 2-3 once a week, eyes are cleaned daily. You need to bathe a dog at least once a week, or more often. Claws are usually trimmed 3 times per month.

Affenpincher is a breed with a penchant for some diseases, like most other breeds. Among them: 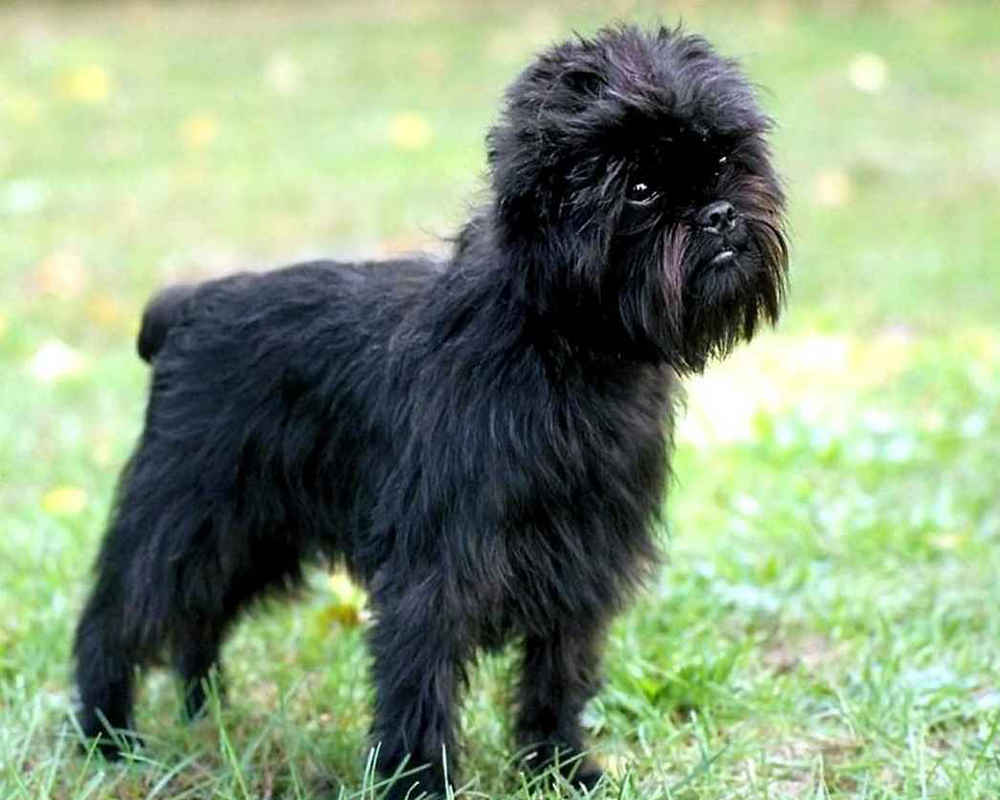 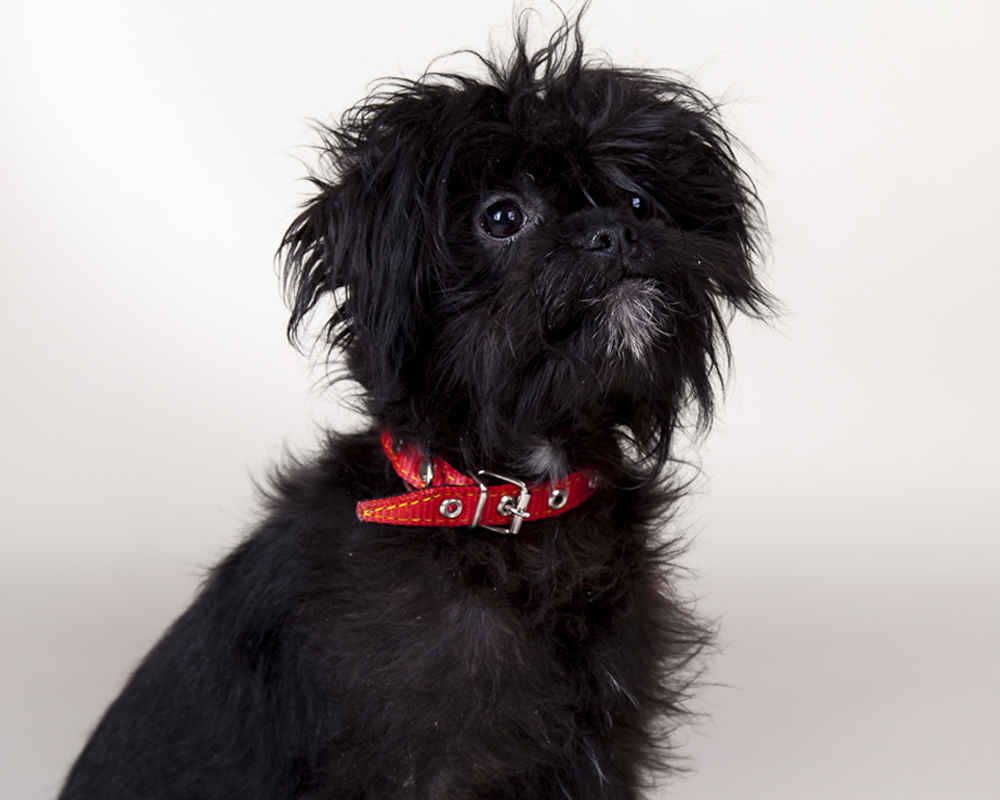 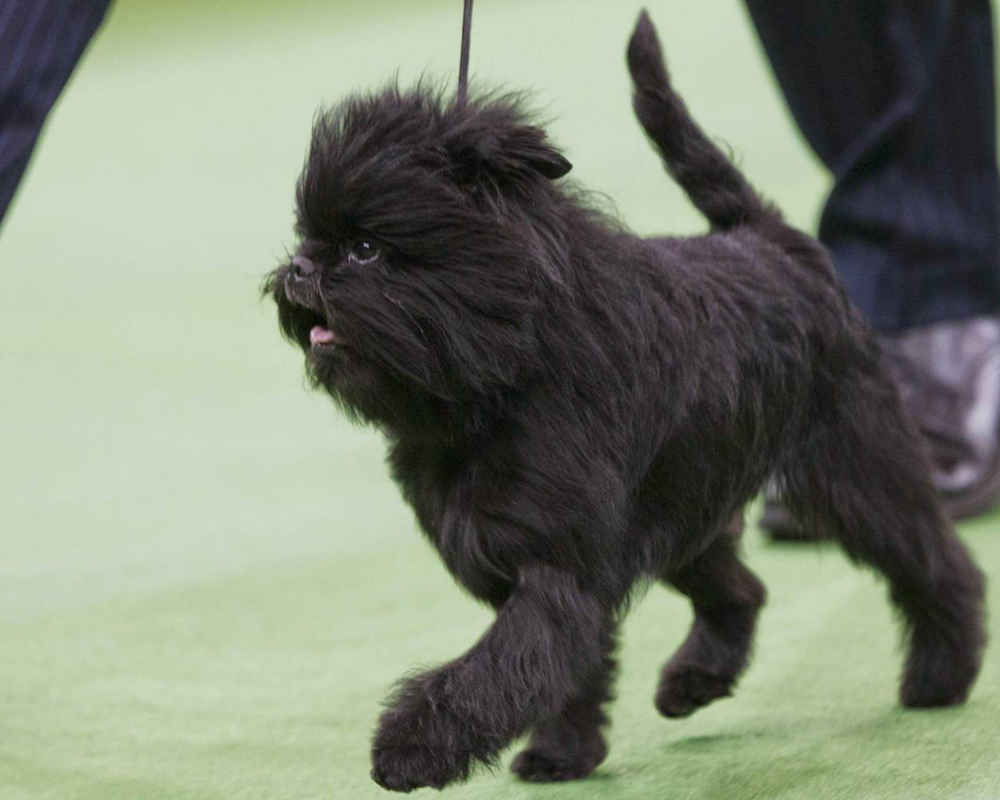 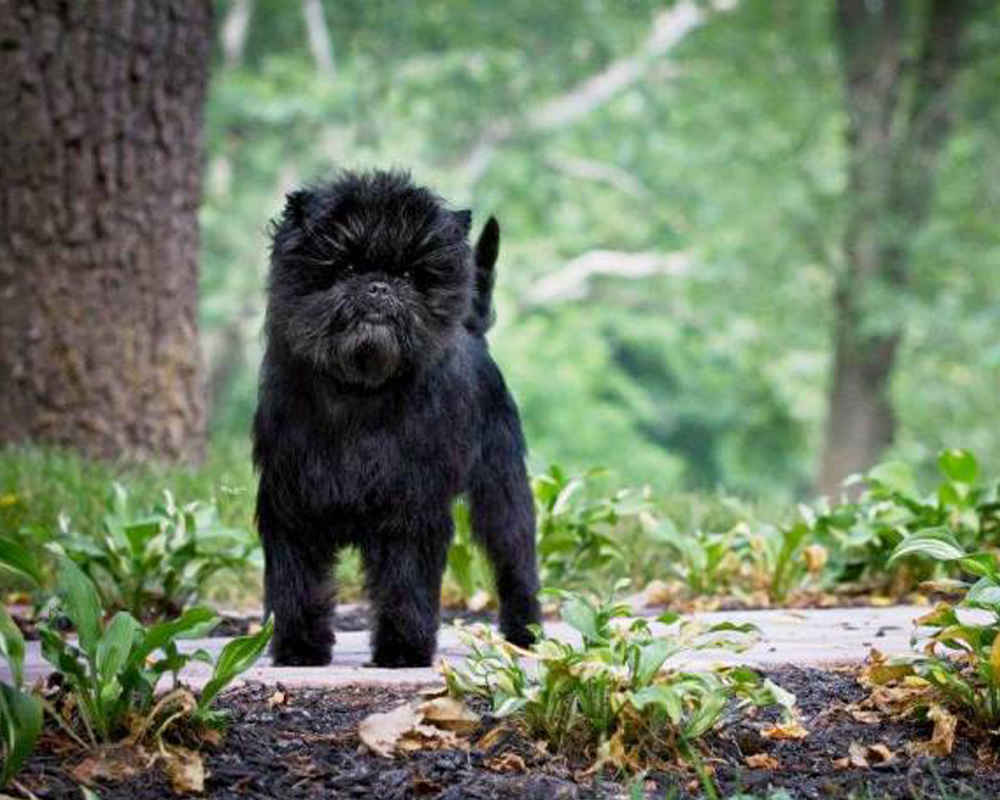 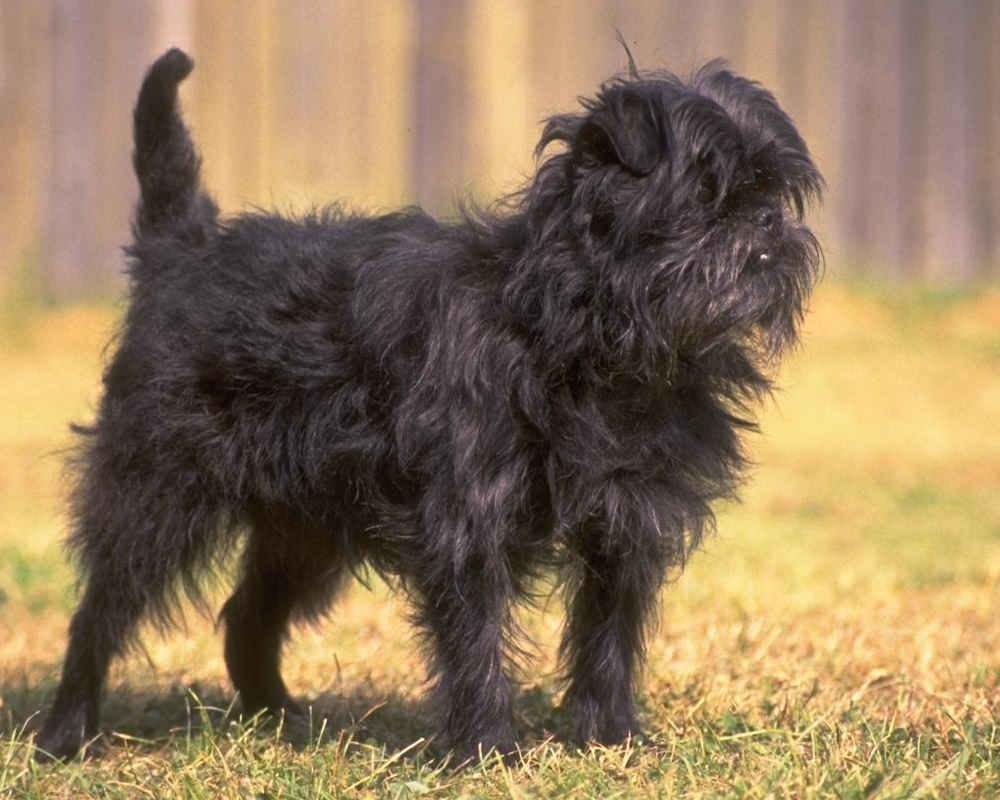 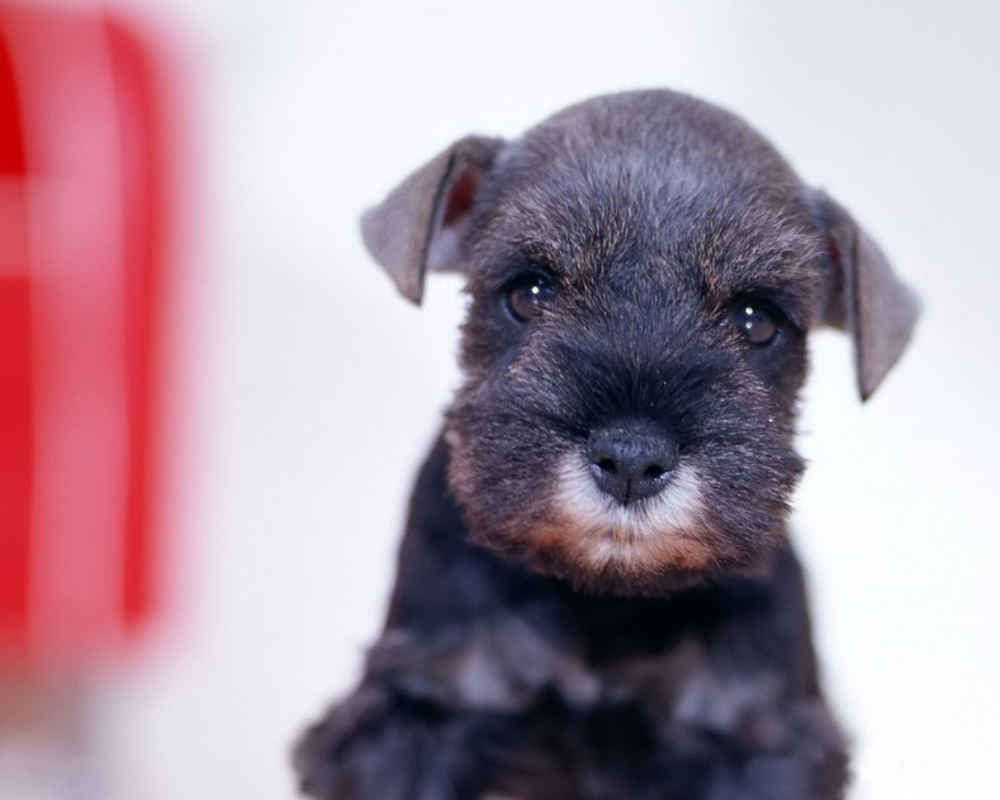