In the Abyssinian breed, ancient grace and features are visible. sacred cats, so revered by the priests of the ancient world. And in the very in fact, the breed holds many secrets. According to the official version of the historical The birthplace of these cats is Abyssinia (the former name of Ethiopia). It is believed that it was from this country at the end of the 19th century that the ancestors of Abyssinian cats were introduced into the British Isles. Today the breed is popular in many countries of Europe, and even in Russia there are pedigree nurseries of Abyssinian cats. To the territory of the past USSR the first cats of this breed began to be imported from the USA at the beginning 1990s. Of particular interest among owners has always been characteristic of cats of this breed are ticked tabby – a picture on the face and hairs on the body, colored alternately in dark and light shades. Ticking gives the impression that Abyssinian cats shimmer in the light. The main colors in this case are wild (the most common and more popular color), sorrel (i.e. red / red), faun (pinkish beige) and blue (the last two colors are more rare and appear in pairs where the clarification gene is present). Wool of these graceful animals smooth, moderately hard, medium in length, tight adjacent to the body. Abyssinian cats are medium in size (their weight is 4-7 kg, growth – within 25-30 cm). Head has wedge-shaped, proportional to the cat’s body. Big ears somewhat forward, which gives the impression that the animal is warily listening to someone, brushes are often found at the tips. The fur on the ears is short, darker than the main color. Eyes are yellow (various shades), less often – green, almond-shaped, outlined in dark color. In the area above the eyes cats using color forms a pattern resembling the letter “M”. The neck is quite long, with a smooth bend. Torso of medium length graceful, muscular in moderation. The back is slightly arched. The limbs are graceful, but muscular, long, with rounded paws. small size. The tail is moderately long, thick at the base, tapering to the tip. In general terms, the Abyssinian cat is pulled up, even thin, flexible and muscular. Cats are larger than cats.

Photo of the Abyssinian cat: 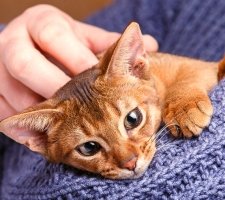 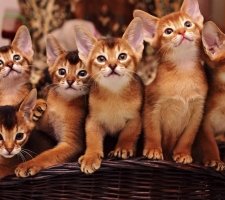 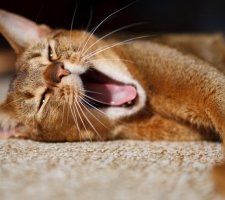 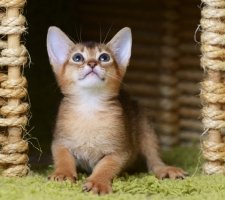 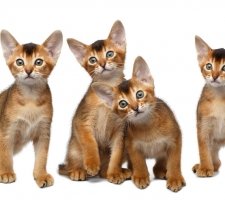 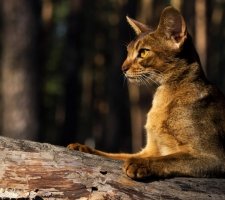 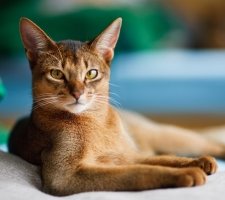 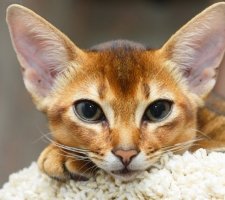 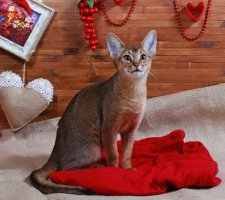 History of an Abyssinian cat

The first exhibitions in England where you could see Abyssinian cats, passed in the 1870s. A breed standard was drawn up in 1889 G. Stiles is the author of many animal works. Abyssinians at that time were a cross between cats from African Abyssinia and British shorthair. According to legend, the first cats were imported from Abyssinia in 1868. However, there are many other versions claiming that the ancestors of these beautiful cats did not live at all in Abyssinia, but Egypt – another ancient African state. Like these cats were the favorites of the ancient Egyptian pharaohs and even honored the honor of being buried with special honors. For sure it is not known which cats were so beloved in the Ancient Egypt. Perhaps it was the domesticated wild cats of Africa – caracals, reeds and bogs. Since the ancients figurines and drawings repeated only the image of a cat with enough large ears, rather elongated muzzle, slender body, but without accurate detail, it’s difficult to reliably talk about which as if the type of predatory cat was laid in the Abyssinian breed. Can to judge only that the spread of these cats occurred precisely in Africa many centuries ago.

Owners of Abyssinian cats note their excellent character and good-natured attitude to each member of the family. They get along well both with people and with representatives of other cat breeds, and also with dogs. They are rarely aggressive. In addition, they curious enough – just look at any photo representative of the breed. In the eyes of the abyssin is full of vivacity and attentiveness. They are very mobile, like to play with the owner or self occupy yourself. But rarely do Abyssinians play pranks (climb up the curtains, gnaw plants, etc.) – mostly them the games are harmless enough for the property of the owner. In minutes of rest cats of this breed love to sleep peacefully on the lap of the owner or be half asleep. By the way, Abyssinian cats rarely scream (or do it quietly enough). But express your benevolent mood with the help of measured purring – this is in their character. These cats, if desired by the owner, can be trained by simple teams, for example, “here” (“place”), “on” and others. Many owners with Abyssinian cats love playing with soft throws ball (or other small object) when the animal is passionate catches him on the fly. The best qualities of Abyssinian cats – devotion to the owner (contrary to the assertion that this quality is inherent only dogs), well-developed intelligence and good disposition. These animals they don’t tolerate loneliness, they readily pursue the owner, when he does household chores. As if involved in affairs families.

Short hair of an Abyssinian cat does not require special care. It is enough to comb out dead hair every week with using a special brush. Such a simple procedure will allow keep your pet’s coat in a healthy and beautiful condition. Claws are trimmed as needed. Usually it happens a couple of times a month. To prevent occurrence periodontal disease, which is common in cats of this breed, is necessary brush your teeth regularly with a paste prescribed by your veterinarian.

The diet of Abyssinian cats can be natural or industrial. Boiled meat and poultry (beef, lamb, rabbit, chicken, turkey). You can give fish, but no more 1-2 times a week, moreover, only sea (in the river can parasites occur). In addition to protein products, the cat will need boiled vegetables (carrots, beets, zucchini, broccoli), chopped using a blender or finely chopped. Dairy products, in including cottage cheese, for normal digestion give several times per week (you can give preference to yogurt, natural yogurt, kefir). Such foods supply the cat with calcium. Eggs are given to pets no more than 1 time per week (meaning boiled chicken yolk). Dishes prepared for a cat may be flavored with vegetable (preferably olive or linseed) oil, and from salt should be discarded. If the owner chooses the path hand-made cooking, it’s good to consult with a veterinarian about vitamin complexes because it is very difficult to achieve a balanced diet on your own. A good solution is the choice of feed for industrial production. but Do not buy economy-quality goods. They are cheap and harmful. for animal health – they have a bad effect on the digestive system, the genitourinary system, harmful during the period of growth of the cat. The best option – dry and wet feed of extra-premium and holistic. Them basis – natural meat, vegetables (fruits), sometimes cereals, vitamins and nutrients. An animal should never need clean drinking water, a bowl with which should always stand close to the couch. Dishes for food should not be leave with dried leftovers – after feeding it should be wash thoroughly. Even dry food must be poured in accordance with recommendations on the packaging.

With good care, an Abyssinian cat purchased in a kennel can live over 15 years. Typical problems for the breed are: